skip to main | skip to sidebar

Tamashanter's Geronimo TRB0 (Black). Show/Breeding buck. Nice buck. Keeping his brother already and limited cage space. He is $35. Born May 15, 2010. Out of Wildwood's Betty 7LG2 and Highwood's Sail Away.

Tamashanter's Lulu TRBR3 (Black) Brood Doe. $35. Keeping her sister and limited cage space so must part with this sweetie. Out of Wildwood's Betty 7LG2 x Wildwood's Rambo 0A1

Oct. 4, 2010: Tammi's Doe
Mini Lop: Mitchell's Spazola CX01 (Black- choc carrier) X Mitchell's Better Than Chocolate PC07 (Chocolate Steel). Very excited to have my first Chocolate litter. Not all will be chocolates but should be some in here for sure.

On October 1, 2010 Saskia's Blue Mini Rex "Posey's Blue Jayda" delivered 4 babies. 2 Blacks and 2 Blues. Saskia is thrilled that she finally has some solid blues.
Posted by Tamashanter Rabbitry at 6:39 PM No comments:

Pictures of Betty and Rambo's Pick Daughter of the Litter Born August 4, 2010. 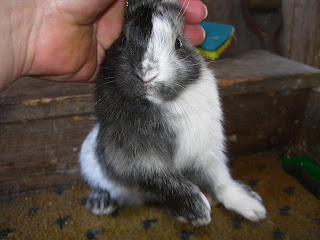 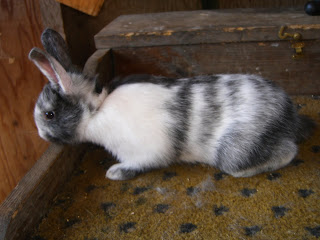 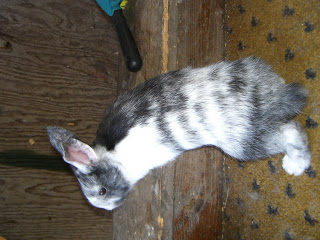 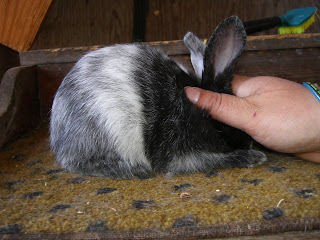 Tamashanter's Priscilla TRBR1.
Harlequin Magpie-Black.
I just love this doe. She has such a clean front and beautiful face split. It of course could be cleaner. She has 1 dark ear and 1 white ear although does not alternate from her face split. She also has a nice clean chest and leg split although again not alternating from face split. She has beautiful body type. She is firm and compact. She has stripes on her left side although not as clearly defined. She shows promise and is show quality. I am sure she will produce nice babies for me.
Posted by Tamashanter Rabbitry at 9:50 PM No comments: 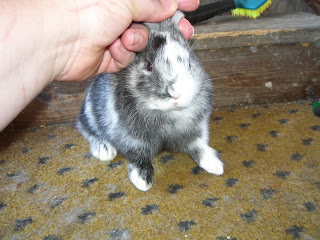 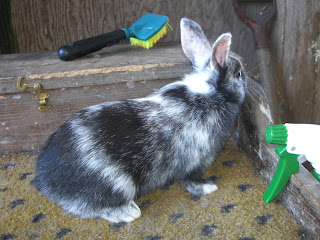 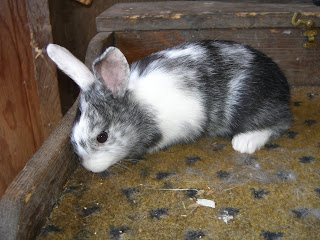 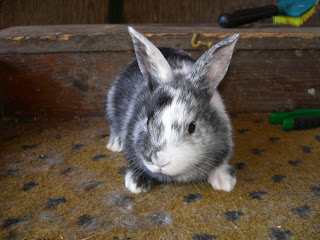 Tamashanter's Ruth TRBR3. Harlequin Magpie-Black
This is my 2nd pick doe of the litter. She has the alteration happening on her ears but not as clearly defined as it should be. She also has one foot dark and the other light although not fully alternating.She needs more definition to her face split. She has some bars but not enough but I like how her color definition is better than her mom's. She will make a nice brood doe.
Posted by Tamashanter Rabbitry at 9:41 PM 2 comments: 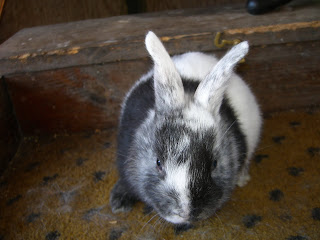 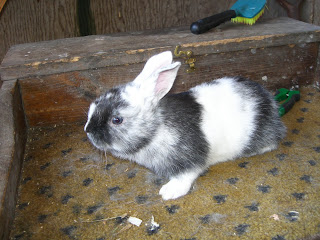 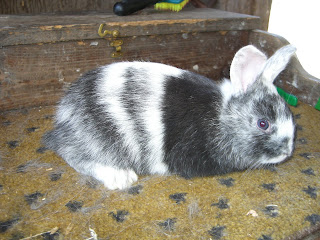 Here are pictures of Betty and Rambo son. I wish the other 3 babies survived but I still have 3 decent magpie harlequins in this litter. 2 of the best in the litter died with one of them being one the best I have ever since. I was so depressed, but I do have siblings which are still quite nice.

These are pictures of my buck. Tamashanter's Noah TRBR0
I love his color definition. He has the start of a face split with decent banding on his right side. He does not have the color alteration on his ears, but he has qualities that I like and need to improve on. I believe he is a chocolate carrier with those grey eyes.
I will be keeping Noah and look forward to seeing what this guy produces for me.

Posted by Tamashanter Rabbitry at 9:23 PM No comments:

Saskia along with Kim Posey took a few of our animals down to the Saanichton fair on Saturday Sept 4th. I was just coming off a set and a night shift at that. I got home at 9am so I was way too tired to go to the rabbit show.

Doug Sprague (sp?) was the rabbit judge. Saskia wrote under Doug and had a good time. She told me he still wont take her to the United States. LOL He's a smart man. Who would want to take a crazy 15 year old to the States. She asked him at the April show and he told her she had too much energy for him. Need to get passports in order before we can go to any US shows.

As for our Show results, I did not do well, but only showed 3 animals, although, Saskia did very well with her 6 rabbits.

Mini Rex- Black SR. Doe KT's K80T "Annie" placed 2/2 but starting a molt. She will be retired and bred in the next day or so.

Mini Lop- Solid Jr. Buck TRK0 Tamashanter's Ghost Ryder (REW) placed 5/5. He is still coming into himself plus no where near where the Posey's animals are show wise.

Mini Lop- Solid Jr. Doe TRK1 Tamashanter's Carmen Electra (Chinchilla-Black) placed 5/5. She needs work, but she is much better than her mom was.

For me, this is a breed that I am working on. I don't think I will show mini lops for awhile till I feel I am competitive enough and will continue to work on the mini lops. I also have a pair of chocolates. Chocolate buck and Chocolate carrier doe.

Broken:
Jr. Buck Tamashanter's For Your Entertainment TRZ0 Placed 1/1 and Best of Variety.

Now to get ready for Cowichan Exhibition next weekend September 11 and 12.
Posted by Tamashanter Rabbitry at 11:43 AM No comments: